Baana Theertham
Last month, I had been to Tirunelveli, our native town, with my family. It has been quite long since we visited the place. We planned to go there on 2 different occasions last year and earlier this year, but had to drop off due to many reasons. Finally, we were able to go there last month.
I am not going to bore everyone with the details of the three day tour during when we visited temples after temples. But I was more interested in the Baana Theertham falls. This is situated near the Papanasam Dam in the Kallidaikurichi – Mundanthurai Tiger Reserve forest. 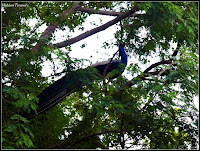 A dense, low altitude reserve forest in the majestic western ghat, the reserve forest not just houses the tigers, but also houses the fast disappearing Langurs, Indian Peafowl (Peacocks and Peahens) and the spotted deer. From the time we entered the foot hills, we were able to spot so many peacocks roaming around freely. An easy target for senseless poachers!
The Papanasam dam can be reached through road. Best bet would be to take your own vehicle as I think the frequency of buses is very less! You can take the SH (State Highway) 178 from Ambasamudram to Papanasam. 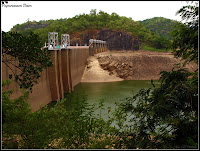 On reaching the dam, we had to take the motor boat across the reservoir to reach the place. The capacity of the dam is about 145ft, but when we went last month the water was only 42 feet. I am not able to imagine how it will be if the reservoir is full. They send us in a group of 15 people per boat. If you think you want to be on your own, you can either have 15 people in your gang, or pay for 15 and take the boat if you are a bit less in number. NO! Don’t be ridiculous enough to take an entire boat just for 4 or 5 people just because you have the option for paying. J
It is a good 2km (approx) travel across the lake, which took about 20 minutes to cross. I am sure with good monsoon and more rains, this distance will increase along with the water level. Once we have crossed the lake, we had to climb up about 100 meters through a trail to reach the falls. This climbing will also reduce if the water level is high. We climbed up the 100 meters to reach the falls. It had good water and now there are railings for safety while bathing.
What we saw was a breathtaking sight. The falls was pouring from a height of 100ft approximately. We were not prepared for a bath and the crowd also was a bit unruly. So all we did was spend some time there, click as many photos as possible and return back. The place is worth visiting again and hoping to do so at the earliest, unless any external circumstances stop me… 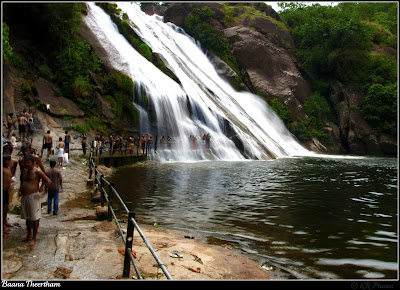 Posted by Trails of a Traveler at Thursday, September 17, 2009 2 comments:

Yet another weekend and yet another travel planned. This time specifically for the shutter bugs. Anu came with the idea of Vani Vilas Sagar dam and with some checks on the internet we found that there is a fort some 30kms away from the dam. So we decided to explore the fort and the dam in the same day.

The plan was to start on the early morning of 8th August; reach Bangalore in the afternoon; have some sunset photography from Anu’s place in the evening; put up there in the night and then start the next day as early as 3:30am.

Now knowing about such a plan, do you guys really think it would have been fun if everything goes by the plan? Or when was the last time we have planned something and walked by it? Never is the answer for both these questions! 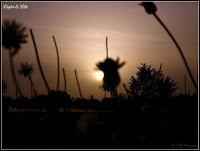 For the Saturday morning, I had some very important work waiting at home, which I cannot postpone or procrastinate. Worse enough I came to know about this only on Friday evening. So I had to call up Rajesh and inform him that I may not be joining them in the morning due to this work that has come up. Everyone include Rajesh would have come home and bundled me up had they not realized the importance of the work. But they did tell me that I had to be in Bangalore atleast by Saturday night and absence is not excused! It was rather a strict order so I had a deadline to complete the work, as if I was in total control of it.

Somehow, I managed to complete the work by around 2:30pm, went back home, freshened up, had lunch and started out by around 3:30pm. Luckily got a KSRTC bus to Bangalore by 4:00pm and was on my way to Bangalore. I reached the Silk Board Junction by around 10:30 and called my friends who were staying in Anu’s place in KR Puram. Suresh was my rescuer. He was in the Silk Board junction within 30 minutes and we headed to Anu’s place. All our friends were already there after shopping and shooting since afternoon. Except a couple of them most of us were in no mood of sleeping. It was already around 12:30 when I reached Anu’s house and if someone expects me to wake up at 3:30am in the morning, I would call them morons. So decided keeping awake is the best option.

In the morning, or rather the extended night, Anu prepared coffee for us. This needs to be mentioned otherwise I am going to be in serious trouble. After having coffee, some of us took the pains of taking bath. 3:00am in the morning is no time to take bath for me, and definitely not in Bangalore!! We were supposed to start at 3:30, but I would be surprised if 10 people get ready within an hour’s time and sets off. The cab that Suresh had arranged for had come on time. But we started out from the house only by 4:30. Not too late though.

We set off on our journey and proceeded further in the NH4. Around 6:30, after crossing Tumkur, we stopped to take a glance of the rising sun (not son). After the shutters clicked for about 10 to 15 minutes, we proceeded to our first destination – Chitra Durga Fort. On the way we made one more stop for breakfast. After having breakfast, we decided never to stop in that place again, even if we are starving.

In the next 15 minutes we were outside the Chitra Durga Fort. Suresh got hold of a guide to walk and talk us through the fort. Once in, we were in complete disbelief about the size of the fort. It was just huge and had seven levels of entrances. Really a Fort!

The name Chitra Durga is means “Artistic Fort”. It still has some leftover of the excellent architecture of historical India. Though some inscriptions trace it back to the era of Emperor Ashoka and the Maurya Empire, it gained prominence only during the Nayakars regime. The initial fort was by the Rashtrakutas and kept on expanding by other rulers until 18th Century. Chalukyas, Hoysala, Nayakas and the kings of Vijayanagar Empire are some of the well known kings who did the expansion. 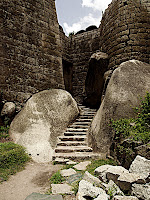 Bharamappa Nayaka was the most famous of the Nayaka rulers who was famed for building forts, palaces, tanks and temples. He also made sure that the Mughals are kept away from the fort and the arts within the fort. Hyder Ali was the last to capture the fort from the Nayakas of Chitradurga and further expanded it followed by his son Tipu Sultan. This is currently under the supervision of the Archeological Survey of India (ASI) as a protected monument.

It took some effort for the guide to explain about the fort and more effort from our side to understand what he says. Once we started venturing into the fort, we realized what the guide has shown us is only a portion of the fort. The guide showed some of the important parts of the fort and went on to describe the history of it, the battles fought, hits the fort has taken and so on. He also showed us how the fort has been hit by cannons and withstood the impact.

Another interesting thing, not actually related to the fort or the history, as the feats of Jyothi Raju. A na 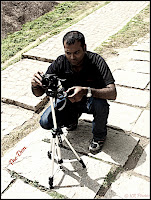 tural climber, who learned the climbing skills by observing monkeys. He can leap into any wall in any fort and within seconds he can reach the top, just like a monkey. All this he does with absolutely no safety latches or ropes. Everything is done with bare hands. He is in his quest for making a guiness record in climbing and our people are using him for monkey show sort of business. What a recognition for talent!! For more information on this guy, you can visit Shrinidhi Hande’s blog.

We started exploring the fort in our own ways; making sure to take photographs of everything that we felt was interesting. This carried on till noon, with people exploring on their own the various parts of the huge area where the fort was. Around 2:30pm we decided to get moving from there. We found a hotel in the same locality and had a good lunch. By around 4:00pm we started to Vani Vilas Sagar Dam.

It was around 4:45pm when we reached Vani Vilas Sagar Dam and the setting sun was already setting the water to glitters. We made use of this beautiful lighting for photographing the dam and the lake for over an hour. It was a beautiful place. Though we did not have much time to explore the dam as such, since we arrived there late, we made use of whatever time we had with us. 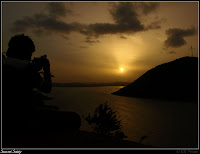 The sunset at the Vani Vilas Sagar Dam offered some excellent lights and we tried some various techniques with whatever cameras we had, to make the lightening look more appealing and beautiful.

That was the end of a wonderful one day trip. Once again, I had the feeling that we need more time for entirely exploring the Chitra Durga Fort. It was really huge and one day is certainly not enough to explore all the palaces and the arts within the fort.

Here are the photos shot in ChitraDurga. And these are from Vani Vilas Sagar.