Here are the photos taken during the outing

A plan was on to go for a bird watching trip to the Marsh Lands in Pallikkarani from CTC photography team. Though the birding season is over and almost all the migratory birds would have gone back, we nevertheless decided to go on for a bird watching.

For me, the day started as early as 4:00am. I was to be picked up from Guindy, which means that I will have to travel from Annanagar to Guindy. I was really surprised to know that during that time of the morning, the buses would be so jam packed from Koyambedu. Good that I dropped the idea of carrying a tripod. 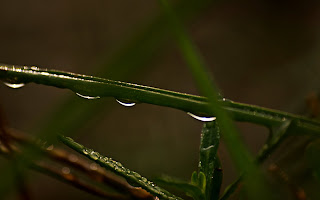 Anyways, I reached Guindy by around 5:00am and called Hari, the organizer of the event. Meanwhile the others have already gathered at the Velachery MRTS station by around 5:30. Hari and me reached there by around 5:45am. Without wasting any further time, we distributed the fruits that Hari had brought along and start towards the marsh land. The entire place was thickly covered with smog. We were a bit surprised to see such thick smog during this time of the year. I was even wondering if there would be any dew at all, but later on it was confirmed that there was quite a lot of dew. See for yourself...

Hari, who had come there the previous week, was really shocked to see that the water had dried up quite a lot and there was only very little water left out. Now this has turned out to be a real marsh land. But we were not disappointed as to the availability of birds. We could immediately see that there were a few Egrets and Herons hoping around. We drove a bit further and took the road that connects Pallikkaranai and Pallavaram in which you can see the most of the marsh land. The stretch would be about 2 kms long. The marsh land extended quite far on both sides of the road. 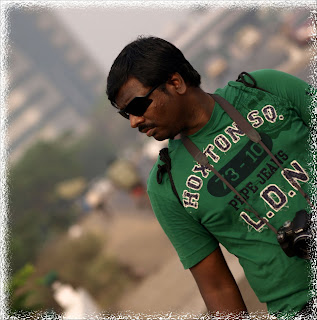 Everyone parked their vehicles at the start of the road and started walking along the land. A few had brought some birding books which would help in identifying the birds and Hari also had brought a binocular for spotting distant birds.

While everyone were engrossed in watching birds and few attempting to watch bugs a flowers, your truly, notorious for catching people unawares, got into the candid camera business. Though it was not a major success, there were some funny catches!

We walked along the road and were able to spot quite a few birds, and of course some poochis (bugs / insects whatever) and photograph them too. Following is the list of birds that we were able to spot in the 2 to 3 hours of spending there. 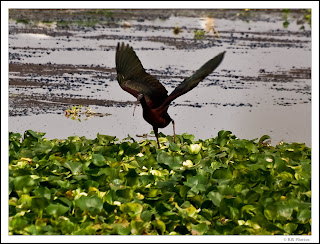 There could be more. I am still waiting for some the birders to update their findings.

After spending about 2 hours or so, and when the sum has started beating on us really hard, we decided to return back. We headed to the Velachery Ratna Café and had a good breakfast, before calling it a day.

Overall it was an interesting day with so many birds still hanging out in Chennai irrespective of the heat and the end of birding season.

This was a good write-up of your bird watching experience. Of your photographs I especially like the spot billed pelican and the purple heron. Both were great shots!

You went birding in the April sun near Chennai....hats off (in the heat) to you! The Purple Heron shot is really lovely! (Well, I like the others, too, but this one particularly.)

Me, I am slothful in the summer. The birds are safe from me then!

@Linda: Thanks a lot. The Spot Billed Pelican was my favourite too..

@Deepa: I am surprised you like the Purple Heron. I was actually not satisfied with most of the photos in this trip...
BTW it certainly was not all hot. You should have seen the thick cover of smog in the morning!

Nice. One correction - The one u have put down as Yellow Bellied Prinia is an Ashy Prinia (Former is not found in S India). Ashy Prinia shows rufouscent wash to underparts.

Also what bird do you mean by Common Egret?

@karuthedam: Thanks for pointing out in the identification of the Prinia. I will get that changed.

The Common Egret is actually a Cattle Egret. It is my mistake. Have changed that as well!

Yeah, it was a very nice experience.. though it was hot and documented only a few birds, we enjoyed the photography and the day!!

Are you sure about the Black Ibis? We get to see them in far more drier landscapes. The Glossy Ibis, on the other hand, is a more common bird.
The yellow-bellied Prinia is also not likely to be seen here. Possibly this was the Ashy Prinia in breeding plumage.
V. Santharam

@rajasekar: I agree that only few birds are documented. Usually there should be some person who is an expert bird watcher to document all the birds that we spotted and circulate.

@Santharam: It looked strikingly similar to the Black Ibis. Maybe you can confirm it with the picture.
You are right about the Yellow Bellied Prinia. I have changed it now..

Dear sir, I hope it's not at all Black Ibi. Please verify once again with your photo "see the V mark in head".
Arunsankar.N.
PALANI HILLS BIRD WATCHERS SOCIETY,
ODDANCHATRAM.
9842176730.
mail::arunaware_odc@yahoo.co.in

@joshidaniel: Thanks Joshi. It was one of those difficult shots without a tripod. Had to take atleast 5 photos before I got one blur free...

oh you a professional photographer huh, me too have photos of the bird sanctuary of Kumarakom. Not much bird photos eventhough.

about the thing you asked to visit Aripara waterfalls reply just posted in. Have a look buddy.

@PixelShots: I am not a professional photographer. At least not yet! But yes photography is a pasion for me.
Thanks for the reply on the Aripara waterfalls. I will have a look.

Do connect with us to share your birding experiences.