More photos in this link

What is the first thing that comes to our mind while mentioning Goa? Beaches, Old European buildings, a multi-cultured crowd enjoying the beaches etc.? Well yes, I too had the same impression about Goa, as I have not been there before. But, there is another side to this wonderful place that is not much seen or shown in quite a few place.

Villages typical to a South Indian hill station reminiscence of a small "Malabar" village! One with nature - flora and fauna, reduced foot prints of the gadgets that one might use in the city and completely with nature.

It was to one such place that Birdwing had arranged for a bird watching trip. While the common birds are always there, the plan was to get a sighting of some of the species which are either endemic to the place or not so common in other places.

The bird watching started right in the resort we were staying. Being in close proximity to a sanctuary helped us quite a bit.


We had a fantastic naturalist from Goa, who helped in spotting some of such birds. Best among them is the Oriental dwarf kingfisher. One of the most difficult to spot in its natural habitat, much less photograph it, but thanks to our naturalist, we were able to do both!


The tiny fellow prefers to sit in a densely covered trees near streams or other water bodies. Adding to the shade and clutter is the tiny size of the bird which may its almost impossible to spot for anyone who is not trained or accustomed to the natural world!

One more such bird in the Blue-eared kingfisher, which can be easily mistaken for a Common kingfisher. But this one is slightly different the Common. See if you can make it out!


The Bhagwan Mahaveer sanctuary and Mollem (pronounced as Molle) were in close proximity and provided a rick fauna. Spending some time in the sanctuary and the adjoining small villages can really bring out a variety of birds.


We also made a trip to the Zuari river, which is about a 90 minute drive from the place where stayed. With the mangroves and the island that it creates, this place provides wonderful opportunity for some waders and other birds that predominantly depends on water bodies and the food it offers.

The mangroves are also home to some of the other awesome creatures. In one particular place we say the Fruit bat / Flying fox by the hundreds. The low tide also brings out some unique creatures like the Mud skipper - an amphibious fish that lives in burrows in marshy mud. Of course, not to mention the more deadly predators as well!

By the end of 3 days that I stayed there, Goa had impressed me in a totally different way, from what I have heard and seen in movies. The place where we had stayed also provided wonderful opportunities for bird watching and photography.

Definitely would want to visit the place just for seeing the natural wonders of this less explored part of Goa.

Valparai is a place that is still a good spot for those who would want to have a good taste of the nature. Though there is a steep increase in the tourist and commercialization off late, some place still holds its natural beauty!

The tea estates have replaced the forests in quite a few places, which has let to a forced state of co-existing of the animals and humans. The estates might look quite green and beautiful for the average person, but the conflict between humans and animals have increased indeed.

At least there are clear markings throughout the town on where animals usually inhibit during the day. This helps in both spotting animals from a safe distance and also avoids conflicts to some extent. Here is one such place where the lion tailed macaques can be seen.

This one seems to be abandoned by its group and lives near the vicinity of humans where it can get some easy food.

While the animals are trying to adopt to such changes in the environment, some of the smaller ones like this Malabar giant squirrel still have their natural environment to an extent. I really hope it remains that way and measures taken to further improve the natural environment.

The place is still abundant with some birds. Within the tea estates and and on the forests, there are still a good amount of birds. Though the environment for some of the birds like the Great Indian hornbill are shrinking, there are still a few of them which calls valparai its home!

Here are a few of them.

The lakes, dams and water bodies within and outside the tea estates offer a good hunting ground for the raptors or the birds of prey.

There were a couple of things that we really wanted to see in Valparai, but it did not materialize. At least not to the extent we wanted to have it.
Seeing a leopard and the Great Indian hornbill was high on our "expectation" list. We did see it, but only a glimpse. During one of the night outings we did near our home-stay, we did see a leopard coming down from a rock with its menacing eyes glowing green in the night. But that was it. Could not get a proper sighting in day time and much less photograph it.

Similar situation with the hornbill. While returning from Valparai, there is a specific view point for the hornbills. We did see a couple of them flying right above our head with their wings making swooshing sound. Just for 2 seconds! That is it! Before we could even say we say it, it vanished behind the trees. Running behind it in the wooded rocky place was next to impossible. Need to visit again looks like!

However, what will not disappoint you is if you are there for a some beautiful views and pleasant weather! Valparai, despite its commercialization and modernization still has offers some amazing views and weather for sure. 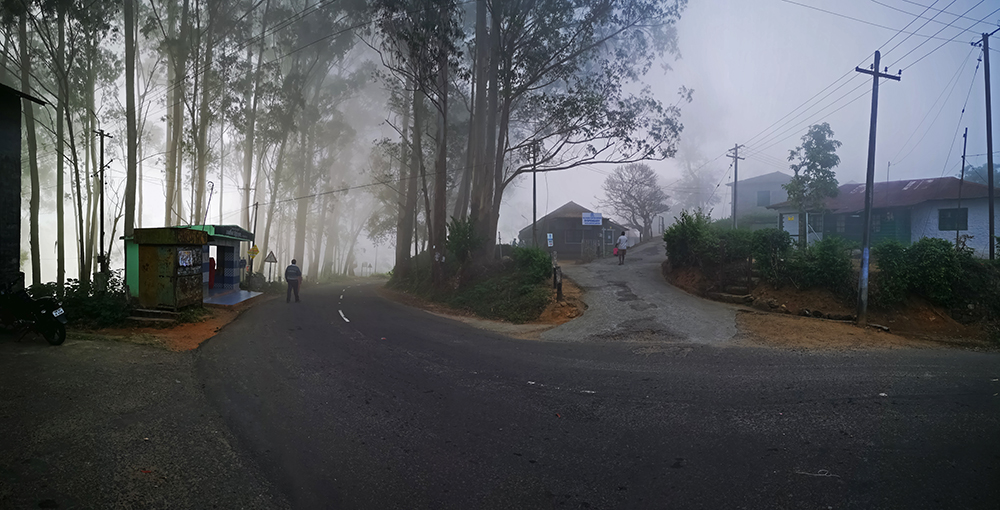 A good fun filled trip with friends and a mixed bag of experience. If some of the natural habitats can be maintained or improved, Valparai is definitely a wonderful place to experience!

Posted by Trails of a Traveler at Sunday, February 09, 2020 No comments: